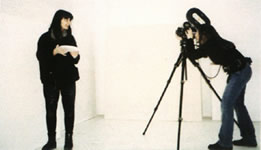 A view of the creative process through the eyes of a mother and her daughter. The result is a film moving delicately back and forth between the filmed images and the painted canvas, suggesting a dialogue between the two mediums.

Céline Gulekjian left Brussels at the age of 18 moving to New York to enroll in NYU Film School. Previous to Ecart, she wrote and directed Flavors of my Memory, a video about her Armenian background identified through the food prepared by her grandmother.